Radar Systems, Inc. has the roots from 1977, when a scientific laboratory was founded to research Ground Penetrating Radar technology at the Riga Aviation University. We had transformed our scientific group into a private enterprise in 1991, and Radar Systems, Inc. had started to offer scientific research and development in the field of the GPR to the market.
Radar Systems, Inc. designed, manufactured and sold more than 1000 GPR systems around the world. Our GPR systems are used in many countries on the five continents, from the permafrost of Canada, to the hot deserts of Western Australia.
RadarSystems, Inc. supplies its own GPR software Prism and RadarMap. It's designed to acquire GPR data for the real-time underground utilities mapping on the bitmap, vector and online maps in the different local coordinate reference systems.

Ground-penetrating radar (GPR) is a geophysical instrument that uses radar pulses to image the subsurface. It is a non-intrusive Ultra Wide Band device for the sub-surface surveying to investigate underground objects. This nondestructive equipment uses electromagnetic radiation in the microwave band (UHF/VHF frequencies) of the radio spectrum, and detects the reflected signals from subsurface structures. GPR can have applications in a variety of media, including rock, soil, ice, fresh water, pavements and structures.

The experience and technologies what we got and developed during the scientific work are applied in our product families: Zond, Python and xGPR.

The Zond GPR is a general-purpose GPR using a wide line of developed antennas with central frequencies from 38 MHz to 1.5 GHz.

The Python GPR is a low frequency (25 - 100 MHz) land analogue of the space radar used for subsurface soil sounding of Mars (Project Mars-96) and designed by Radar Systems, Inc. researchers in close cooperation with their colleagues from National Space Agency of France (CNES) and Service d'Aeronomie Institute (France).

The xGPR is new product based on the FPGA and high speed ADC technologies with improved Noise to Signal Ratio and increased stacking.

PRODUCTS AND SERVICES IN SPACE 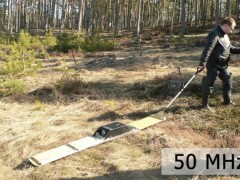 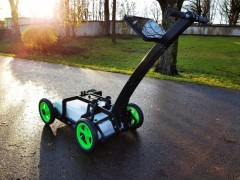 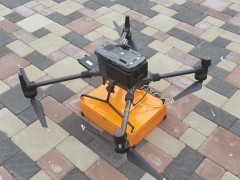