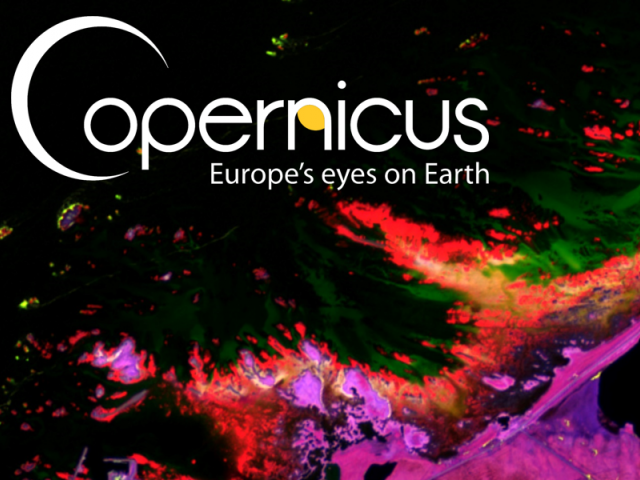 The EU Earth Observation programme Copernicus provides full, free and open access to its data from Sentinel satellites. This data is used to deal with important issues of our planet. The programme is complicated, but hides lots of cool facts behind!

1. Did you know that Copernicus is the largest Earth Observation (EO) data provider and the third biggest data provider in the world?

Copernicus delivers 20 TB of geodata daily. This means that the amount of Copernicus data produced in one day is equivalent to a 1.5-year-long film in high definition! More strikingly, if you wanted to stream all the episodes of the famous 9-year-long Santa Barbara series, you would manipulate the same amount of data that Copernicus produces in less than 3 hours. To take another example, the full F.R.I.E.N.D.S series would only account for less than 2 minutes of Copernicus data production.

The Copernicus programme is unique as it is the first EO initiative that provides data in such volumes and diversity!

The Copernicus Sentinel satellites currently in orbit fly around the Earth at about 7.5 km per second or 27 000 km per hour! This is more than 21 faster than the speed of sound!

3. The in situ component – the unsung hero of Copernicus

Sentinel satellites are of course the superstars of the Copernicus programme. However, Copernicus also uses in situ sensors – ground-based, sea-borne or air-borne monitoring systems – to complement the Sentinel data providing ground truth information to deliver highly reliable and operational data.

For instance, in order to track water temperature and salinity, the Copernicus Marine Environment Monitoring Service (CMEMS) uses data from Argo – a collaborative partnership of more than 30 nations from all continents, working together to provide a global array of over 3,000 floats. These oceanic floats deliver information about parameters of the ocean from the surface to a depth of 2000 m. For comparison, the maximum depth of the Baltic Sea is only 459 m.

The Copernicus in situ component also deploys a battalion of marine mammals to help humans better protect marine ecosystems as well as the Earth in general! Hundreds of seals and other marine animals are being equipped to carry small sensors to gather data on, for instance, temperature and salinity, while also recording data that is used to study marine mammal behaviour to better protect endangered species. 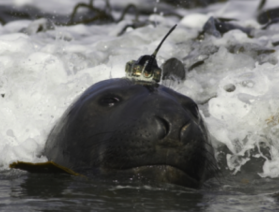 There are also other heroes of Copernicus who combine science with pleasure: surfers are using their boards to take sea surface temperature measurements, providing a source of validation of Sentinel-3 measurements.

4. Specialists behind the Copernicus Emergency Management Service are on 24/7/365 duty

Copernicus delivers data and information frequently, ensuring that we have the most up-to-date data about the Earth. For instance, Sentinel-2 passes over the same location every 2 to 5 days depending on the latitude, whereas Sentinel-3 and Sentinel-5 have a revisit time of less than 2 days!

Responsiveness and timeliness are particularly important for the Copernicus Emergency Management Service (EMS). The Emergency Response Coordination Centre (ERCC) of the European Commission is responsible for triggering the Rapid Mapping service of the EMS. Once they receive a request during an emergency, such as an earthquake, a flood or a forest fire, the ERCC team immediately mobilises the rapid mapping teams which produce, in rush mode, maps to assist disaster response actions of relief workers – be it late in the night, on a weekend on a public holiday.

As a result, the Copernicus specialists can produce maps within hours or days after receiving the satellite data. The response time is dependent on the orbits of the Sentinel satellites, on the availability of data from other satellites above the affected area and on the local weather conditions. It is worth noting that this service is available globally. For instance, EMS helped the US emergency managers during the 2017 and 2018 hurricane seasons.

5. You could be reading about Pegasus now instead of Copernicus!

Until 2011, Copernicus had a different name – it was called GMES, which stood for “Global Monitoring for Environment and Security”. Even though the programme’s name was self-explanatory, its abbreviation was somewhat complicated to pronounce and explain.

Therefore, in June 2006, the European Commission launched a school competition for young people to propose a new name for the programme. The then Vice President of the European Commission responsible for enterprise and industry policy, said: “The acronym GMES does not do justice to this ambitious earth monitoring project. I hope that Europe’s youth will be able to come up with a more inspiring name. The race is on.” The prize for the winners was an unforgettable hot air-balloon trip over their home region. The jury’s choice fell on the name Pegasus.

After several years, the programme was renamed “Copernicus” to more closely align with the other EU Space Programme, known as Galileo.  In this way, the European Union paid homage to two equally important European scientists who greatly influenced modern science – and our way of seeing our own planet.

Nicolaus Copernicus was a Polish mathematician and astronomer who changed our understanding of the Earth and the universe by demonstrating that the Earth rotates around the Sun and not vice versa. Galileo Galilei (which gives its name to the European Global Navigation Satellite System) was an Italian scientist who stated that the heliocentric theory of Copernicus was correct, which cost him his freedom, as the Church sentenced him to indefinite imprisonment keeping him under house arrest until his death in 1642. 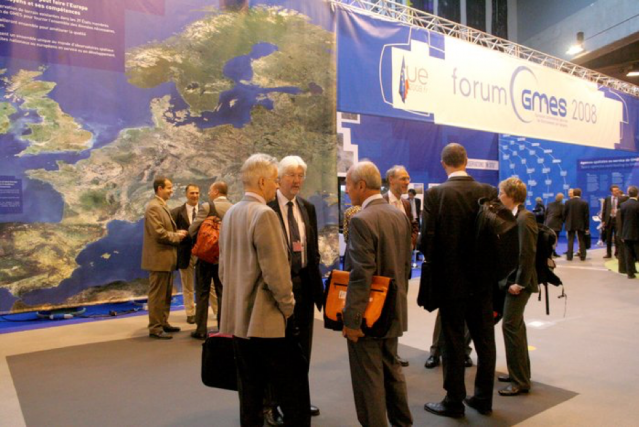 The GMES 2008 Lille forum held at the Grand Palais in Lille, France. At this event, the new name of the programme was unveiled. Credit: CNES - Fabien Ploegaerts

There are currently seven Sentinel satellites in orbit: Sentinel-1A and -1B, Sentinel-2A and -2B, Sentinel-3A and -3B and Sentinel-5P (information updated from the original article). Each Sentinel mission flies at a different altitude:

The lowest flying Copernicus satellites – Sentinel-1A and -1B – fly almost 70 times higher than commercial planes. Moreover, the highest-flying Sentinel-5P flies twice as high as the International Space Station, which cruises around the Earth at an altitude of 408 km.

We challenge you to capture the International Space Station on a Copernicus image! You could try using EO Browser, an easy-to-use app developed by Sinergise, a Slovenian SME, or other Copernicus data access points.

The first satellite launched by Copernicus was Sentinel-1A, on 3 April 2014. In order to sustain its operations for the planned minimum 7-year mission, Sentinel-1 is powered through two solar arrays. These two arrays are the same length as a bowling lane – 20 metres. Continuing with the bowling metaphor, Sentinel-1 weighs as much as 317 bowling balls!

8. Copernicus can also “see” things invisible to the human eye.

Satellites such as Sentinel-2 and -3 carry so-called multi-spectral “cameras” that see things that are sometimes invisible to the human eye, such as algal blooms, the health of vegetation, the soil moisture, etc.

Other Sentinel satellites, such as Sentinel-1, carry radar sensors that can see at night and through the thickest cloud cover. They can detect phenomena such as ground movements of a few millimetres caused by underground mining or by earthquakes. They can also detect oil spills from space or measure sea ice thickness in cold regions. 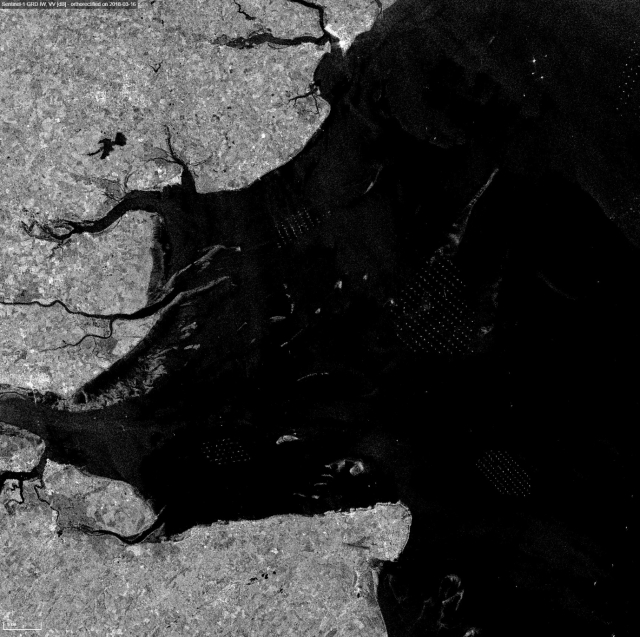 Wind farms off the English coast (Thames estuary) as seen at night and through clouds by Sentinel-1. Credit: Copernicus Sentinel data processed by the Copernicus Support Office.

9. Sometimes, Sentinel satellites are plane spotting, have a look!

Copernicus can supply you with occasions to discover cool features – if you are lucky you can spot planes and helicopters within the images captured by Sentinel satellites. This occurrence is rare and provides an excellent example of an exciting technical phenomenon.

When captured by a Sentinel, planes and helicopters appear as three red, green and blue dots or lines. Why do you think this is? 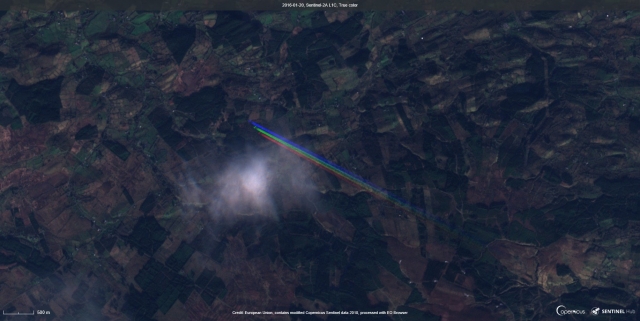 A view on an aircraft and its contrail over Ireland captured by Sentinel-2. Produced by the Copernicus Support Office using EO Browser

Each time Sentinel-2 captures an image, its multi-spectral instrument takes 13 consecutive images of the Earth across 13 spectral bands (image data with different light wavelengths). Mr Markuse, an expert, explains – “To take the whole sequence of 13 images, the detectors need 2,586 milliseconds, so about 2.5 seconds.”. Accordingly, the 13 images are taken with a slight time delay between each acquisition. This difference is not noticeable in images of the Earth’s surface – taken from 768 km altitude, the 13 spectral images of Sentinel-2 are perfectly calibrated and, subsequently, combined into one homogenous final image.

These time differences are more significant for planes in flight, which cruise at high speed at around 10-12 km above sea level. As Sentinel-2 images are calibrated to generate homogenous images of the Earth’s surface, planes and helicopters which are several kilometres closer to the Sentinel satellites are not calibrated correctly because of a so-called parallax effect. This causes an offset, showing planes as three red, green and blue spots or lines.

Why do we see these dots and lines in red, green and blue colours? This is because Copernicus true colour imagery is displayed via the RGB visualisation option which is achieved by combining red (Band 4), green (Band 3) and blue (Band 2) bands.

Why do we see planes sometimes as dots and sometimes as lines? When the air is relatively dry at the plane’s altitude, we see the planes as dots. Whereas when the air is humid, exhaust from their jet engines leaves a contrail – as shown in the images above and below. Voilà!

The Veneto region in Italy with a plane crossing Venice captured by Sentinel-2. Produced by the Copernicus Support Office using EO Browser